PRIDE AND PASSION
Back to Categories

Brazalian Series....At the beginning of the 20th century, a mother dreams of marrying her five daughters to eligible bachelors but marriage is not a priority in Elisabeta Benedito's life. More than finding true love, the strong-willed dreamer and her sisters want to live according to their own choices and to do so they must go against traditional rules and customs. Inspired by Jane Austen's works, this romantic comedy retells classic novels from the point of view of modern and empowered women. 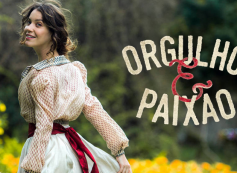